History, players, results, gossip - everything you need to know about the national football team of Italy is here!

I don't normally like stereotypes but sometimes they fit, and here's one which is undeniable :  Italians are passionate people.

They're passionate about food and family, about their home, their neighbourhood, their country - and their sport.  Not just passionate - they are sports crazy!

When the Italian national soccer team is playing, our entire village turns out to watch on a screen in the village square - no matter what time it is! 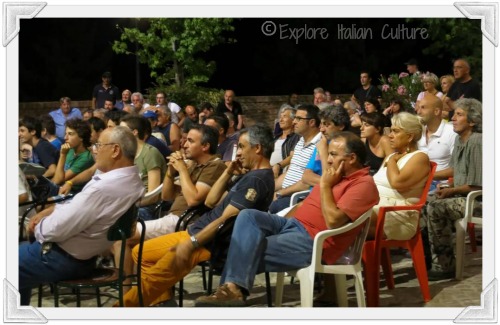 There are a number of daily national newspapers completely devoted to sport.  The three main ones are Gazetta Dello Sport, Corriere Dello Sport, and Tutto Sport. Every day without fail they report on the previous day's sports events and nothing else.  Everything is covered, from motorsport to cycling, from volleyball to fencing.

But way out in front in column inches is 'calcio' - football, soccer - call it what you will.

One for the album - Italy's national football team, UEFA Cup 2012. 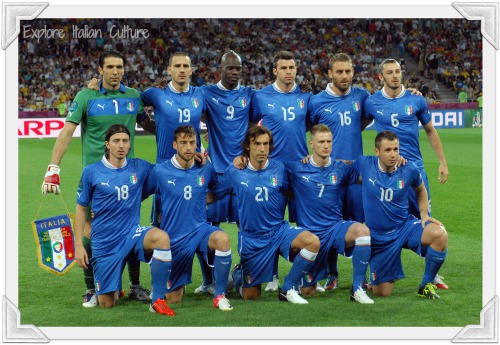 It's the national sport and there is enormous interest and pride in it and particularly in the Italian national soccer team, the 'Nazionale', more commonly called the 'Azzurri'.  They are the Azzurri because of the dark blue shirts - 'Azzurri' meaning 'blue' - which are their traditional colours.

The Italian national soccer team and the beginnings of the World Cup. 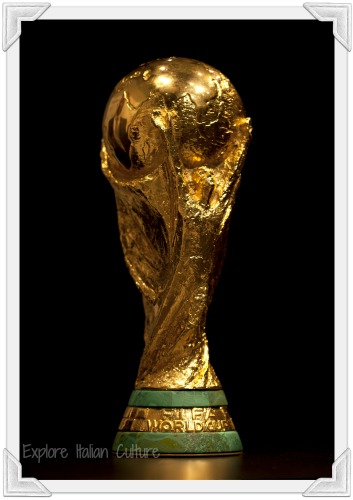 Of course, Italian pride in their football team is not misplaced as they have been hugely successful.

Although the Italian Football Association was formed in 1898, the national team did not play their first game until 1910 when they started their celebrated career by beating France 6 - 2.

Since then, they've won the 'Federation Internationale de Football Association' - better known as FIFA - World Cup four times which makes them the second most frequent World Champions, with just one win less than Brazil.  Furthermore, Italy can proudly claim to be the first European winners of the competition.

At its beginning, the FIFA World Cup was not the huge deal that it is now and Italy, along with many other countries, did not enter the inaugural competition in 1930, which was won by Uraguay.  But after that - there was no stopping them. 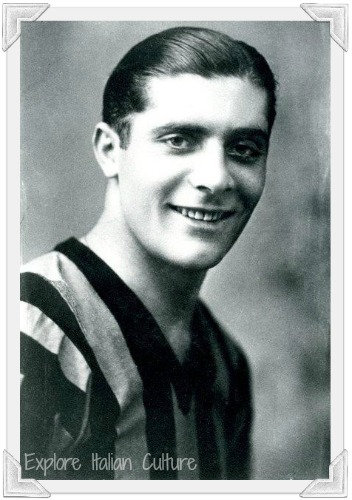 In 1934, coached by Vittorio Pozzo, the Italian national soccer team won their first ever World Cup.  That team included some of the greatest players of that era : Monti, Ruffino, Rosetta, Ferrari.  But the real Colossus of the squad was Giuseppe Meazza.

Football historians still consider Meazza the greatest ever Italian player.  The magnificent stadium which is home to Milan and Inter, known to football fans worldwide as the San Siro, is in fact called the Giuseppe Meazza San Siro.

With more or less the same squad, Italy went on to retain the World Cup in 1938.  Sadly, the second World War then put an end to the competition until 1950, and that great team would not be seen again.

The Italian national soccer team, the swinging '60s and the sensational '70s!

Although they would not be winners of the World Cup again until 1982, Italy remained a team to be feared.  By the mid-1960s they had re-grouped and were widely seen as favourites for the 1966 tournament. But in one of the greatest shocks of international soccer, the team were knocked out by North Korea.

To compensate for the 'blip', Italy went on to win one of the World Cup's 'little brothers', the European Championships, in 1968.

Including fantastic players like Fachetti, Riva, and Rivera, the Italian national side were again World Cup favourites in Mexico in 1970.  In one of the greatest ever games at international level, they beat West Germany 4 - 3 in the semi final before losing to a fabulous Brazil team in the final.

By the time of the 1982 World Cup, Italian soccer was in trouble.  There were betting and match fixing scandals in the domestic leagues and the national team was seen as in disarray. 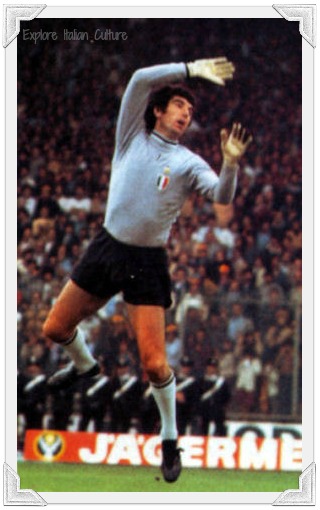 This was not helped by being in the toughest qualifying group imaginable.  Against the odds, they beat the much stronger Brazilian and Argentinian teams to qualify, and went on to win 3 - 1 against West Germany in the final.

Dino Zoff, Paolo Rossi and Marco Tardelli were the standout players among a cast of stars.

Veteran goalkeeper Zoff was the captain and, at the age of 40, became - and remains - the oldest player ever to win the World Cup.

New heroes, and the fourth win.

With a new crop of heroes - Roberto Baggio (with the famous pony-tail still loved by Italian youngsters today), Gianfranco Zola, and Alessandro Del Piero - Italy's national side remained immensely hard to beat, but were unable to take that final step to success.

In fact, in the three World Cup competitions from 1990 to 1998, they were only beaten once - with the exception of penalty shoot-outs.

Fabio Cannavaro in his Juventus strip. 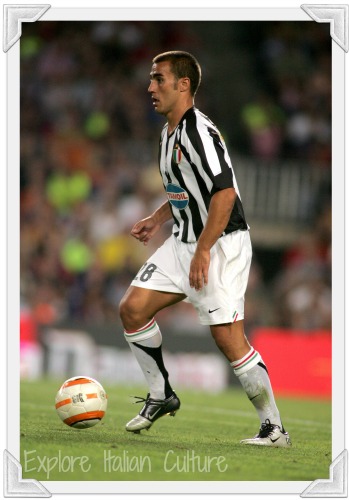 When Marcello Lippi took his team to the World Cup finals in 2006, Serie A was again wracked with match fixing scandals which had tainted even the mighty Juventus, resulting in their relegation from Serie 'A' to Serie 'B'.  Expectations of the national soccer team were low, despite a fine group of players.

But the squad, which included Totti, Del Piero, Pierlo, Buffon and the Captain Fabio Cannevaro, had other ideas, marching relentlessly to the final.

The final itself was a controversial game probably best remembered for the great French player Zinadine Zidane getting sent off for head-butting Marco Materazzi after Materazzi had indulged in some unpleasant insults.  There is now a statue of the incident outside the Pompidou Arts Centre in Paris, much to the grief of French football authorities.

Italy went on to win the game on penalties, and lifted the World Cup for a fourth time.

The present coach is Cesare Prandelli, who led the team to a slightly unexpected runners-up position in the European Championships of 2012. 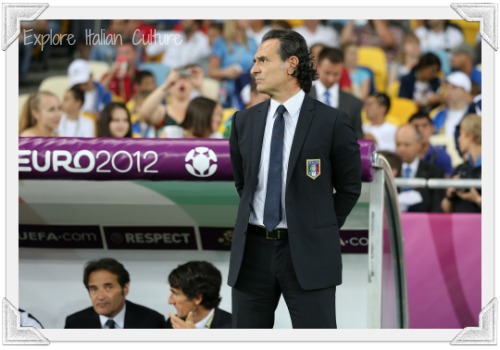 It was 'unexpected', as Italy are currently a team in transition.  Of the Champions of 2006 Gigi Buffon is still keeping goal and Andrea Pirlo is still bending in free kicks and masterminding mid field with little apparent effort.  But elsewhere on the pitch, Prandelli is still searching for his perfect formation.

Much will depend on the growth and form of the exciting young pair from Milan - El Shaarawy and Balotelli, and a resurgent Aquilani.

'Super'-Mario Balotelli in the colours of the Italian national soccer team. 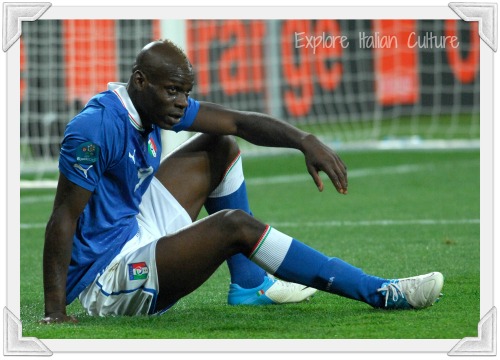 Italy are currently leading their qualification group, but the tickets for Brazil are not booked yet. However, history shows you never write off Italy.

The Italian national soccer team and the local view.

Since moving to Italy, I've shared the enthusiasm of two major football championships and enjoyed some great nights in my local village square as people of all ages gather round the TV screen to cheer on their heroes.  The entire village turns out - men, women, children and naturally, the local priest.

I became a bit of a talking point in the village last year when Italy took on England (my country of birth) in the European Championships and I wore my blue shirt with pride and cheered on the Azzurri to victory.

That's the effect they have on you, the Boys in Blue.

Forza Azzurri! - Come On, You Blues!