Is an olive spread recipe any better than shop bought spreads?

Wondering whether it's worth taking the time to follow an olive spread recipe?  We look at the difference between home made and shop bought.

Firstly, some hard facts about spreads.

Many low-fat spreads used as alternatives to butter have high levels of trans-fats - which medical professionals warn are even more harmful than saturated fats.

Butter, on the other hand, is known to have extremely high levels of saturated fat, regarded as one of the main contributors to heart disease.

Olive oil spread is known to be a great alternative because of its low levels of saturated fat and the non-existence of trans fats.

But a report in the UK found that the average amount of olive oil used in some products is less than 4%. The rest is 'other vegetable oils', additives and preservatives.

Why olive oil spread rather than butter?

Basically because butter is animal fat. Medical research has demonstrated time and again that animal fat is one of the major causes of heart disease. Butter is lovely, and in small quantities it's fine to eat - it's just not as healthy as olive oil spread.

After all, look at who are the longest lived people in the developed world - the people of the Greek island of Crete and the people of central Italy. Why? Mediterranean diet foods, of which olive oil is a major player.

It contains no cholesterol, one of the other contributors to heart disease, but does contain mono-unsaturated fat which is known to help lower the levels of 'bad' cholesterol in the body.

Olive oil spread is now widely available in supermarkets.  Why not just buy it?

Great, if that's what you want to do. But remember to look at the pack to see exactly how much oil you're getting for your money.  4% olive oil is not a great deal. 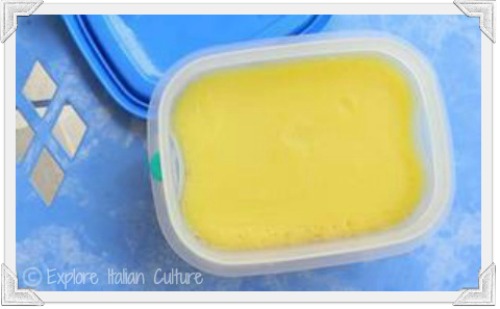 A home made olive spread recipe is made with 100% olive oil. No additives, no preservatives, no anything except for pure, honest to goodness, olive oil. And it's a lot cheaper.

Are there any drawbacks to an olive spread recipe?

Finding its freezing point can take time.  Different olive oils freeze at different temperatures according to its acidity and age so it may take a longer or shorter time for your olive oil spread to solidify.

It's a question of trial and error at first - ours takes at least a day, more if it's very fresh.

If you find it's too hard, take it out of the freezer compartment and keep it in the coldest part of the refrigerator. 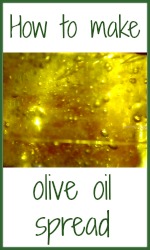 Olive oil is an important part of the Mediterranean diet.  To find out more, use these picture links.

Please note : we are not medically qualified and we do not offer medical advice.  The information contained here is validated by the World Health Organisation and is given in good faith as general advice only.