Ancient Roman Weddings: how their traditions form the basis of modern ceremonies in Italy. 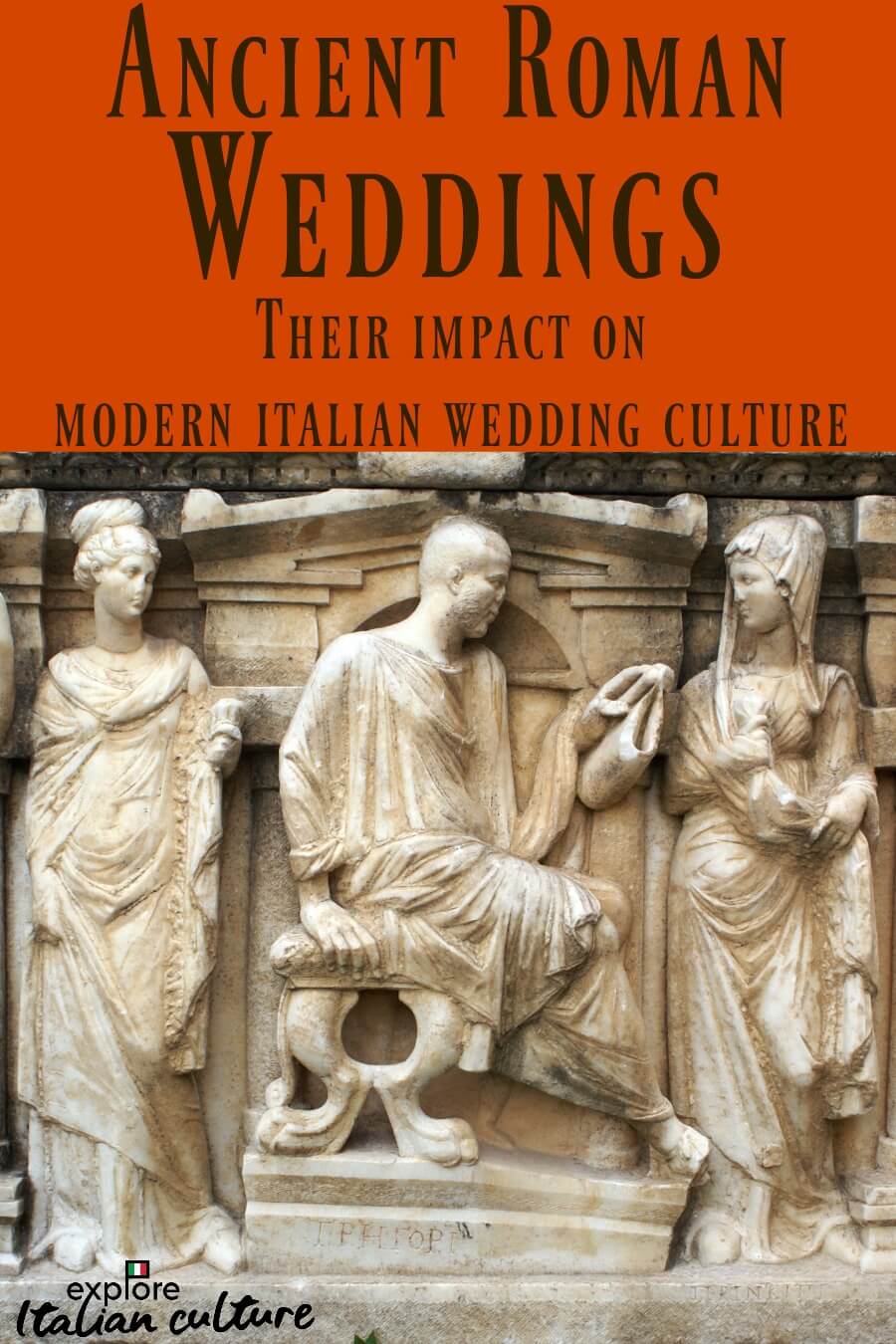 Thinking of getting married in Italy, or having an Italian themed wedding?

Knowing about the traditions passed down from the days of the Roman Empire can help your ceremony's authenticity!

Are you thinking of getting married in Italy and want to add in some Italian culture traditions?

If you're planning an Italian style ceremony in your own country and want to know more about Italian wedding customs to add some classic touches, these pages will help.

We researched this information when we were planning our own wedding in Italy, from reliable, historically accurate sources.

Later, as we were invited to modern Italian weddings, we realised that many current traditions are based in ancient Roman culture.

Here are some fun facts about ancient Roman weddings, from engagement onwards, which we adopted.

Mix and match: use ideas if they appeal to you. Adapt or leave them if they don't. 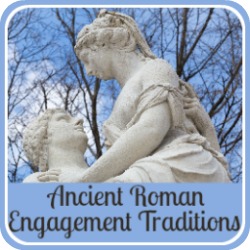 Arranged marriages, dowries, rings, parties, and a contract sealed with a kiss - the things ancient Roman engagement traditions were made of.

But how many of those ancient Italian culture traditions still exist in modern Italian engagement customs? What do they tell us about your engagement party? Who should pay? What should happen?

And what about bachelor and bachelorette parties? Did they happen in ancient Rome? Do they happen now?

Find out in this article. 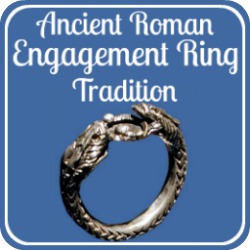 Rings in ancient Roman culture were an important part of preparations for a wedding. The formal contract, publically acknowledged at the engagement party, was marked by the giving of a ring by the groom to his bride-to-be.

Engagement ring tradition has developed since ancient times, yet Italian culture today still embraces many of the customs of Roman culture.

Ancient Roman weddings gave status to the women of ancient Rome: wives held a position of respect and responsibility.

So bridal fashion in ancient Rome was an important part of the Empire's culture. How would the bride prepare for her wedding day? What was her dress like? How did she wear her hair?

And, importantly, what Italian customs do modern day weddings have which existed in ancient Italy?

This page gives practical tips which will help if you are having an Italian-themed wedding, or if you are getting married in Italy and want to follow some very old Italian bridal traditions.

Ancient Roman clothing and the bridegroom. 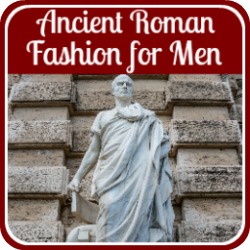 Italian men in modern wedding preparations may take a more active part in planning the day than was the case a generation ago, but details still tend to fall to the bride.

Men's part in ancient Roman weddings was no different. This page describes the part the groom played in his wedding day and the clothes he would have worn.

It also looks at the Italian culture and traditions for men at weddings which have been passed down through the generations from ancient Rome to modern Italian culture. 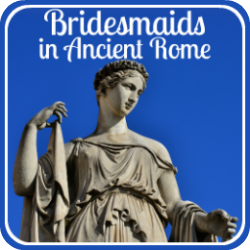 Bridesmaids were as important a part of ancient Roman weddings as they are of weddings today.  Many of the bridesmaid duties which are still a central part of Italian weddings began in ancient Rome.

This article tells you everything you need to know about bridesmaid customs in Italian culture, from Roman times to the present day.

Covering how the women of ancient Rome still influence bridesmaid traditions; what colour bridesmaid dresses were acceptable; bridesmaid's hairstyle ideas; and how many bridesmaids there should be. 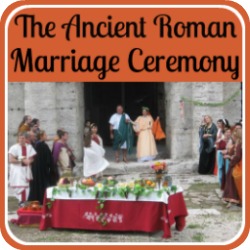 The legalities of marriage in ancient Rome did not have to be carried out formally in a ceremony. But for aristocratic families, they certainly were.

This page explains exactly what happened during the ancient Roman marriage ceremony, and looks at the traditions which have remained to this day.

And if you want to add some authentic Italian wedding traditions into your own ceremony, we explain how these ancient customs can easily become part of a modern marriage service. 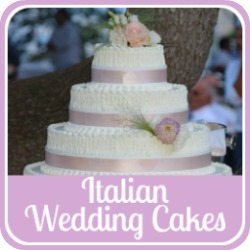 From formalities to feast: the link between the wedding ceremony in the Roman Empire and the celebrations that followed was the cake.

This article looks at how the ancient Romans first developed the wedding cake: what it was like, how it was used, and how it became the extravagant confection we think of today.

It also looks at Italian wedding cakes today, and how you can incorporate those traditions in your own wedding to give it that authentic Italian feel.

Ancient Roman food and the wedding feasts of the Empire. 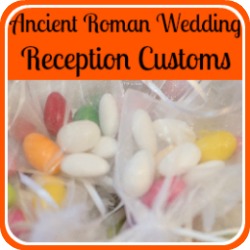 Just as in wedding celebrations today, the wedding reception in ancient Rome was an extremely important part of the day.

This page looks at ancient Roman food: what was available, how it was presented, how it differed from modern Italian wedding food, and what hasn't changed much.

And it suggests what you can do if you want your own reception to reflect the wedding traditions of the ancient Roman wedding feast. 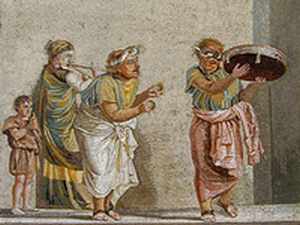 As darkness fell the bride would by symbolically "ripped" from her mother's arms by the matron of honour.

She would carry a spindle, as a symbol of her womanly skills, and accompanying her were musicians and guests.

As she left her parents house to walk to her new home, the guests would shower her, not with paper confetti or rice, but walnuts, which were another sign of fertility. Superstitious to the end, the new husband would carry his bride over the threshold. Tripping at that point was viewed as a portent of terrible things to come. The threshold carrying would be repeated three times.

For the third and final time upon entering the house, the bride would give her consent to behave as an obedient wife before being led to the wedding chamber.

Inevitably it would be decorated with yet more signs of fertility, particularly fruit. The guests, not wanting the party to end, would stand outside singing while the matron of honour helped the bride undress.

Together, they would offer a sacrifice to the gods for the success of the marriage. After that, the bride would be left alone with her husband.

Back to the future: ancient Roman weddings and modern wedding traditions

The wedding industry in America alone is estimated to be worth over $100,000 billion. The average American couple spends between $17,000 and $27,000 on their wedding. The growth of the industry, despite any economic recession, has been described as "an unstoppable path to profit." 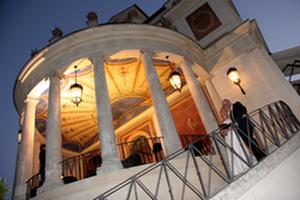 But in terms of wedding culture, perhaps ancient Roman life was not so very different in its key customs from our own.

Here is where modern traditions came from. From engagement parties to the giving of a ring; from elaborate hairstyles to sweet-smelling bouquets; from wedding cake to sugared almond favours: the Romans got there first.

Despite the commercialisation of weddings, a modern day marriage ceremony can combine elegance, sophistication and style with an intimate, family-based, cultured event packed with the symbolism, customs and rituals of centuries of tradition.

And for that, we have ancient Roman weddings to thank.