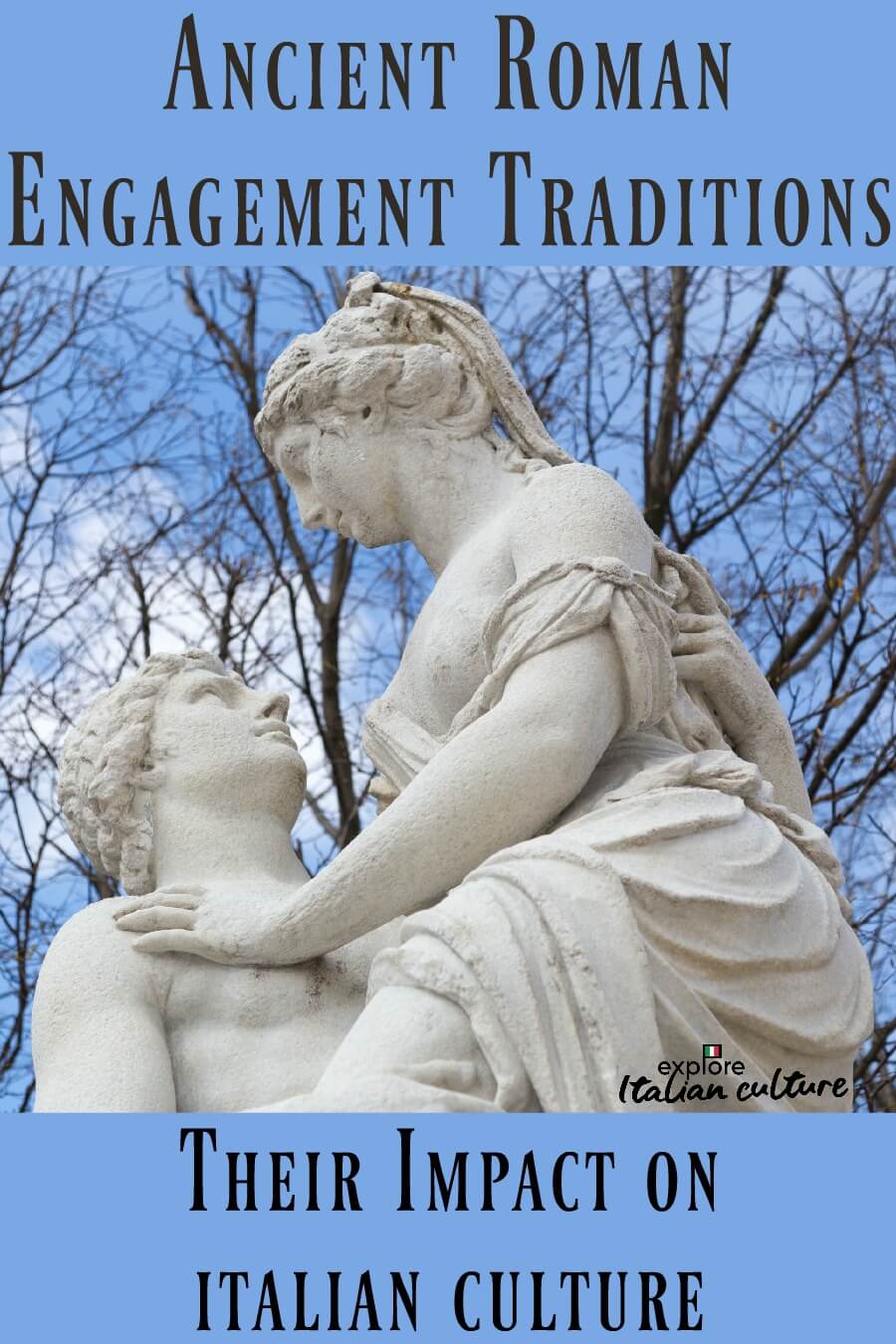 Want to know how to include Italian culture, traditions and customs in the celebration of your modern day engagement?

This is the place to start!

Italian people love to party, and have done for centuries. The ancient Romans knew a good excuse for a party when they saw one.

And what better reason for a party than an engagement?

How did engagements happen?

The father of the bride played a critical part in the ancient engagement process. The system in ancient Roman culture was very similar to modern day arranged marriages.

Many girls were betrothed at a very young age. Twelve was legal, though not common. It was more likely that a future husband would be identified when the girl was aged fourteen or fifteen.

Although he would generally speaking consult his wife, it was always the father, or 'paterfamilias', who would make the ultimate choice. His decision would be based on financial and often political considerations.

Love just didn't enter into it.

Once the decision had been made, it was again the father who would do all the negotiating with the husband-to-be's family. A dowry would be agreed, and a date set for the wedding.

And then - it was party time!

What exactly was engagement party etiquette?

For the happy couple, an ancient Roman engagement was just as much a cause for celebration as it is today. But for the families, it was also a legal part of the process of betrothal.

So, before the party began, there was the official business to complete.

The dowry would finally be agreed between the two families at this party, a formal and legally binding contract signed, and the document officially sealed between the bride-to-be and her betrothed - with a kiss.

The giving and receiving of a ring was never part of the wedding ceremony in ancient Rome.

Instead, engagement ring tradition dictated that the betrothal ring, which would later also serve as the wedding ring, would be given as part of engagement party etiquette. And it was always the woman who received it as a symbol of now belonging to her husband-to-be.

Once the ring had been given and the bride-to-be kissed, the contract was binding.  Only death could release either side.

And in the engagement party etiquette of ancient Roman culture, who would foot the bill for the celebrations?

The father of the bride - naturally!

Were 'hen and 'stag' ('bachelor' and 'bachelorette') parties a part of ancient Roman wedding traditions?

There's evidence that Spartan soldiers used to have something very similar to the wild bachelor parties of today. It's documented that on the night before the wedding, the husband-to-be would gather together a group of his friends. Together they would eat, drink and gamble the night away.

It was seen as his last chance to say goodbye to the carefree days of his bachelorhood, whilst at the same time swearing everlasting allegiance to his friends and comrades.

Not so very different from stag (UK) or bachelor (US)  parties today.

Were there bachelorette parties for ancient Roman women?

No. 'Hen' or bachelorette parties are a relatively recent innovation, probably starting in America around the 1970s.

Ancient Roman women just didn't have the kind of freedom that women today have. Although their husband-to-be could go to as many wild bachelor parties as he liked - and was encouraged to do so - the bride-to-be and her friends had no such leeway.

The most she was able to do was to be pampered with a fragranced bath on the morning of her wedding.

How to introduce Italian culture traditions into your own engagement.

What should you be thinking about if you want to use some of the traditions of ancient Roman culture in your own party?

Here are our suggestions :

Although arranged marriages were a feature of Italian culture traditions they are no longer common practice, with the very occasional exception of the south of the country where the tradition still exists amongst some old families.

However, it's still generally expected in Italy that a prospective son-in-law formally sees the father of the bride-to-be to ask for permission to marry. If you're marrying into an Italian family, make sure you take note of that expectation. Ignore it at your peril!

Go with Italian engagement ring tradition and use your engagement party to make a public statement of your intentions by giving and receiving your ring(s). Make sure you seal the promise with a kiss!

If you're going to stick strictly with Italian culture traditions, the father of the bride would pay for the party. These days, however, the bride- and groom-to-be usually foot the bill themselves.

Women in Italy tend not to go in for the kind of bachelorette parties seen in the UK or America, but take the opportunity to have a quiet dinner with girlfriends.

However, if you want a bachelorette party with an Italian theme, think about a spa package. Ancient Roman baths were an important part of Italian culture and, although the Roman bride-to-be's pampering took place at her father's home, these days spas are a very popular way for Italian women to relax and be pampered with friends before the wedding day.

Wild bachelor parties remain a part of Italian engagement tradition, from a night out with friends to a weekend away. Think about an Italian-themed party - Rome's gladiator school is a brilliant venue.

If you enjoyed this article, these may also be interesting to you.