The history of fountain pens in Italy

As with everything Italian, the history of fountain pens is linked with ancient Romans who first invented the fountain pen.

We trace its origins.

So it’s no wonder they’re the ones who felt the need to invent something to write with.

Who invented the fountain pen?

Most articles will tell you the first fountain pens were produced by Lewis Waterman in 1884. In fact, as with many modern inventions, the ancient Romans got there first.

The way-back-when origins of writing implements, of course, pre-date even the Romans.

Bronze Age man scratched the surface of clay with sharpened bones or metal. Early Chinese writings used brushes made of rat or camel hair. The Egyptians imported reeds and used them to write on papyrus - the forerunner of paper - and the early Roman Empire followed suit.

But as ever, it was the Romans who took the ideas of others and perfected them. They used the bamboo that’s even now plentiful in Italy and made it into a kind of primitive fountain pen, shaping one end into the shape of a modern day nib. 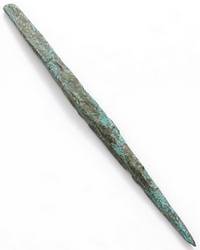 No, it’s not a misprint - the very first Italian fountain pen was called a “stylus” and looked a bit like a nail.

A piece of metal or bone, sharpened at one end and blunt at the other, it was used with a wax or wooden ‘slate’.

The sharp bit was the writing end; the blunt end used to smooth over or correct mistakes - the first ever eraser. 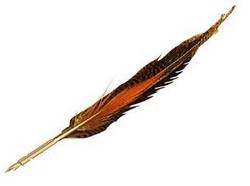 Feather quills took over from reeds when Romans realised that the hollow bone would hold berry juice - the original ink.

Swans, turkeys, crows and geese made the best feather ‘penna’ - the Latin word which gave us the English word ‘pen’.

But they also had their drawbacks. They didn’t hold much ‘ink’, needed constant dipping and had to be sharpened so often that they would become a stump within a couple of days.

That didn’t stop Italians using them though, and quills remained popular in Italy well into the 15th Century - and are often still used in Italian wedding ceremonies today.

Pompeii’s contribution to the history of fountain pens

All the books will tell you that the metal fountain pen was  first produced in the 1800s - either in England or the United States, according to what you read.

But the Romans were there long before that!

Because a pen very like current day fountain pens, including a bronze nib, was found in the ruins of Pompeii, together with an octagonal bronze inkpot. Pompeii was buried by the lava from Mount Vesuvius in 79 A.D. and archaeological digs in England have unearthed Roman nibs in silver as well as bronze - they can now be seen in the British Museum.

The fountain pen as we know it today was first produced in numbers in England and America, in the early 19th Century.

But many of the most creative and innovative pen design comes, as it always has, from Italy.

And for that, we have the
ancient Romans to thank.