The Maremma is the largest Italian sheep dog.  But is this breed the right one for you?

This page looks in detail at this gorgeous Italian sheep dog and uses our own knowledge and experience to help you answer the question: "is this the dog for us?"

Drive over the hills of Le Marche or Abruzzo at any time of year and you are bound to see a flock of sheep or goats with one or more large white or creamy coloured dogs amongst them.

A Maremma, the most popular Italian sheep dog, does what it says on the tin. It guards sheep. Or to be more specific, it guards more or less anything.

The Maremma is a true part of the culture of rural Italy and a reflection of the nature of the people within it. Laid back, placid, intelligent, independent and intensely loyal, its characteristics make it an ideal flock guardian just as the same traits make the people we know in rural Italy true friends.

Like us, you may just be idly wondering what these large Italian dog breeds you keep seeing on your travels in Italy are and where they come from.  You may be thinking an Italian sheep dog would be the ideal pet for your family. You may want a dog to protect your chickens from foxes. You may even want to buy an Italian sheep dog for show. In all those circumstances you need to know more.

So here is a brief guide to one of the most popular of the Italian sheep dog group: their history, purpose, temperament and care. But please bear in mind that the information on this page is taken largely from our own knowledge and experience of Italian sheepdogs from life as we live it in Le Marche. If you are serious about buying this type of dog you need to make sure you get proper breeding and veterinary advice. 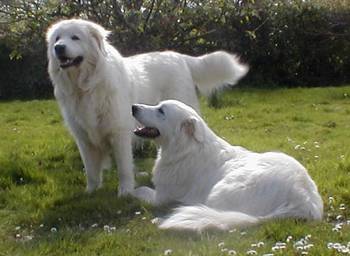 The Italian Maremma, or to give him his proper name, the 'Pastore Maremmano Abruzzese', is the most popular flock guardian of all Italian dog breeds.  You will often see them guarding more or less anything in the fields of rural Italy as they have been doing since the 1st Century A.D.

Today's dog is a mixture of two separate breeds : the 'Abruzzese' and the 'Marammo' which, being so similar, were combined to leave one single breed in the 1950s.

Named by the English visitors who first saw the dog in the Marammano region of Tuscany and mistakenly thought it to have originated there, the Maremma used to play a major part in moving sheep from the mountains of Abruzzo to the plains of Puglia - the 'transhumanza' which came to an end in the mid 19th Century.

The Maremma dog is now used as a sheepdog in central Italy where wolves are still predators, and the breed has also spread to other sheep-rearing countries, notably Canada, the USA, Australia and New Zealand.

A solid, muscular animal, the Maremma is the largest Italian sheep dog.   At around 100 lbs (50 kilos) and standing up to 29" (75 centimetres) tall, it is bigger, heavier and more powerful than either the Retriever or the Bergamasco dog and in stature most like its cousin the Pyrenean mountain dog.

With the same large head and powerful jaws, its slightly wavy coat is white or a very pale gold and its nose, black as a pup, turns pink with age.

The Maremma is one of the most loyal of all Italian dog breeds  and will remain true to one handler for his whole life. That does not mean, however, that he will automatically obey everything he hears asked of him. For the Maremma sheepdog is also independent, highly intelligent and very strong willed.

By no means a submissive dog, he will listen to commands, weigh them up for himself and then decide whether it's a good idea or not - and if he thinks not, the command will quite simply be ignored. This dog is not a servant but sees himself as an equal partner with his handler, a problem-solver there to do one piece of business above all else. This Italian sheep dog does what he says he will do  - he guards his flock.

As a working dog in Italy he is introduced to small animals like lambs at a very early stage and to the rest of his flock when a bit bigger. Once those guarding instincts lock in, he will be the gentlest of guards with the smallest of animals and the most hostile and ferocious if he perceives his flock to be threatened.

Unlike the Bergamasco, the Maremma is not a herding dog. You will often see him sitting alone with his flock for days on end. He knows what his job is and doesn't need to be given any other instruction. He will just guard.  Used with all kinds of livestock from chickens to cattle, he allows domestic and farm animals to live side by side with wild animal predators without the need for guns.

Unusual animal facts : the tale of the Maremma sheepdog and the penguins

And it's not just chickens and sheep the Maremma breed will guard.

Popular in Australia as a flock guardian, a Maremma dog called Oddball, followed by his sister Mollie, has recently been used on a small island off the south-western Australian coast to guard ... penguins.  The experts said it was a crazy idea. The dogs would - obviously - eat the penguins.

But all that needed to be eaten in the end were the experts' words.

Nearly extinct on Middle Island due to the presence of natural predators like the fox and the wild dog, penguin numbers have increased from under twenty to well over seventy since this Italian sheep dog was introduced.

Her handler, Allan "Swampy" Marsh, commented that the Maremma breed isn't bothered about what kind of animal she guards :

"It's not an altruistic view of penguins or chooks but an ingrained sense of  territory that makes Maremma dogs work, and it is far stronger in these dogs than any other domesticated breed ... Oddy is really protective of my chooks, so to her the penguins were only chooks in dinner suits".

So, the big question : is this type of Italian sheep dog right for you and your family?  Here's how you can decide whether this is the Italian dog breed to suit your lifestyle.

How much does the Italian sheep dog cost?

A puppy from an authorised breeder would cost something upwards of 600 Euros ($900, £525) but as well as this the cost of food and veterinary bills for their lifespan of about fifteen years must be taken into account. The Maremma may also be predisposed to hip dysplasia, common in large dog breeds.

If this is just too big a dog for you, have a look instead at the Spinone Italiano or Italian Griffon - a medium sized and easily managed dog.

Does the Italian sheep dog make a good family pet?

That depends. In some senses they make a good family watchdog : not exactly affectionate but loyal to a fault. That sense of loyalty will increase with the dog's age - but the Maremma is not easy to handle and can become possessive, hostile and difficult to control when he perceives an outsider coming into the family home.

The Maremma dog does not naturally like children or other dogs and, if he is going to be a family pet, must be socialised from a very young age.  Remember, that cute puppy will grow into a large, powerful dog with a very strong guarding instinct and a well developed sense of independence. He should be treated with respect and is really a dog for experienced handlers  only.

No. The Maremma loves freedom and open spaces and will become quickly bored and frustrated with a routine lifestyle, especially if kept in a confined area.

This breed is best at outdoor living; their thick coats which make them ideally suited to mountain climates make them equally unsuited to centrally heated houses.

Finally, the Maremma is a strong, free-thinking dog, very strong-willed and difficult to train. A Maremma dog bored and frustrated with city life will be an unhappy addition to the family.

What about a dog for the country?

The Italian sheep dog is at his happiest when working and is one of the best livestock guardians in the world.  Whether the work is guarding large flocks of sheep or goats or a few chickens - or penguins - everything which makes this Italian dog breed a less suitable city house pet at the same time makes them an excellent guardian.

And as a show dog?

The Maremma is now recognised at Crufts and has its own group in the pastoral dogs class.

Like to know more about the Italian sheep dog?
Here is the definitive book.

This book is due to be released in hardback in Canada in late 2010 but in the rest of the world not till 2011. A review has not been possible yet but this series of Kennel Club books is always full of accurate and helpful information.

As soon as the book becomes available, we'll put a link to it here.