How ‘Carnevale’ in Italy fits with Mardi Gras history and its origins in Italian religion.

Think of the words ‘Mardi Gras’ and you’ll probably think of New Orelans and Rio, floats and parades and carnival beads.

But did you know that Mardi Gras is also one of the great Italian holiday traditions?

And that furthermore, it all started with ancient Roman culture?

The ancient Romans, of course, were predecessors of the Italian people.  And, like all good Italians, they liked nothing better than a good party.

To celebrate the winter solstice the feast of ‘Saturnalia’ took place in mid-December, honouring Saturn, the god of seed and sowing, and Opalia, goddess of plenty.

And ‘Lupercalia’, an ancient feast celebrating fertliity, was held in February and is also thought to be a forerunner of Mardi Gras, although it’s also linked with Valentine's Day.

How was it celebrated?

Much the same way as the current Italian ‘Carnevale’ : with a lot of food, drink and general debauchery.

Mardi Gras history and the development of Italian religion.

When the Christian religion grew in ancient Rome, its leaders decided to use these pagan festivals to their advantage rather than try to outlaw them.

Ash Wednesday, forty days before Easter, starts a period of Lent fasting and abstinence.  Knowing that this period of lean was coming, the idea of Carnival or ‘Carnevale’ was born and combined with those ancient Roman feasts to create ‘Mardi Gras’, literally ‘Fat Tuesday’.

Mardi Gras history : one day or one week?

Originally, Mardi Gras was just one day - the Tuesday immediately before Ash Wednesday.  It was a day when families would use up all the fats in the house in preparation for the ban on ‘luxury’ foods like butter and eggs in the forty days of the Lent calendar. 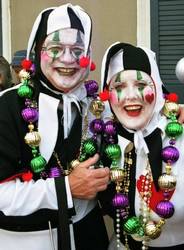 The tradition was adopted by the French who gave its its present name, added the tradition of dressing up and, at the very end of the 17th Century, took the festival to America.

The tradition of Mardi Gras then spread literally across the world.

By the mid-nineteenth century in America it involved floats and lavish costumes and extended to two or more days.

And when those extravagances were well received by the people, the celebrations  became inevitably longer and more unrestrained until finally we have the amazing carnivals of Rio and New Orleans.

So, all other versions of Mardi Gras around the world actually had their origin in ancient Rome and Italian religion and became elongated into the week or longer versions we now know now as ‘Carnival’ - or, in Italy, ‘Carnevale’.

But the aim of them all is the same : to use up luxury foods and have one final fling, partying as hard as possible before the austerity of Lent.


If you can't get to a Carnival you can still watch out for the amazing photos carried in the press. This page will help you by answering the question : when is Mardi Gras?

If you're lucky enough to be in Italy at Carnevale time, this amazing cafe in Venice is one of the best places to see some of the most elaborate costumes.