The ancient Roman Colosseum :
strange facts to entertain you.

The Roman Colosseum is both one of the best things to do in Rome and a great source of fun facts about Italian history and culture.

Whether you want to astound your friends, amaze your children, or simply know more fun facts about Italy or things to do in Rome, this is the place to start.

Here's the first five of our facts about the Colosseum. 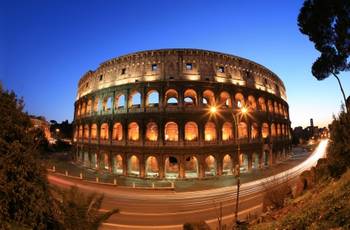 But here are the first of our ten little known and strange facts about the Roman Colosseum to entertain and fascinate you. You can find the next five here.

The Arena of Death lights up for life.

The Roman Colosseum has become known as the arena of death.  In the hundred days of the opening ceremony alone it is thought that around two thousand gladiators and five thousand animals were slaughtered.

But thanks to the City Council of Rome and Amnesty International, the Colosseum has recently emerged as an important symbol in a campaign against capital punishment.

In 1999 the City of Rome led an initiative involving over sixty cities, each of which agreed to light up a well known public monument in a campaign against capital punishment.

Since the campaign began, the Colosseum has been lit with a bright golden light for two days each time an execution anywhere in the world is commuted, or when a nation abolishes capital punishment - about twenty times since 1999.

It was most recently lit in December 2007 to celebrate New Jersey's abolition of the death penalty.  So in what many see as poetic justice the Roman Colosseum, once the arena for executions, entered the new millennium as a symbol of life.

Five million visitors each year pass through the Colosseum in Rome - it's one of the best things to do in Rome for kids and adults alike. Amongst the visitors have been some famous - and infamous - names.

Adolf Hitler and Mussolini visited in 1938; Thomas Hardy admired it; Henry James's Daisy Miller saw it by moonlight; Lord Byron romanticised about it whilst ignoring St Peter's Basilica; Goethe rightly commented that "once one has seen it, everything else seems small" and of all the learned and sometimes pompous descriptions of the Colosseum, the simplest and most heartfelt is that of Stendhal who said simply :

"It is the most beautiful of ruins".

But the most ingenious practical joke played by a visitor was by Mark Twain, who claimed to have 'found' an ancient advert for a Colosseum show.

Advertising "the young Achilles ... with no other weapon than his little spear", the event was to conclude, according to Twain, with an "elegant general slaughter, in which thirteen African lions and twenty-two barbarian prisoners will war with each other until all are exterminated".

And for years he deceived everyone - including the establishment - into thinking it was the real thing.

The ancient Roman Colosseum is officially one of the seven wonders of the modern world.

The original seven wonders of the world date back to somewhere around the 5th Century B.C.; of those only one - the great pyramid of Giza - remains, the rest having been destroyed.

In 1999 a private Swiss foundation launched a campaign to find the seven wonders of the modern world.

In the largest poll ever recorded, more than one hundred million votes were cast worldwide by internet and telephone, and two hundred nominations eventually became a shortlist of seventy-seven.  Finally, on the seventh day of the seventh month, 2007, the results were announced.

India’s Taj Mahal, the Brazilian statue of Christ the Redeemer, the Great Wall of China, Machu Picchu in Peru, Jordan’s Petra and Mexico’s Chichen Itza pyramid now share the honours with the original remaining wonder, the pyramid at Giza, and - the Colosseum in Rome.

It wasn't only lions that fought at the Colosseum in Rome - ostriches were popular too.

New creatures were discovered as the Empire grew and wild animals were studied as well as employed in a variety of ways.  There is evidence that elephants were trained as circus acts, giraffes used in marches, and crocodiles put on show as curiosities.

And the ancient Romans liked ostriches.  It's one of our favourite fun facts about Italy that the strange, exotic birds were used by Emperors to draw their chariots, kept in imperial aviaries, and the Emperor Elagabalus used them as presents for guests at his banquets as well as eating them.

It may seem odd that ostriches were also used in fights at the Colosseum, but the ostrich stands nearly eight feet tall and weighs around two hundred and thirty pounds, runs at speeds of up to forty-five miles per hour - and an ostrich's kick is so powerful it has been known to kill.

There is documentary evidence that these large, powerful birds as well as lions were used in gladiator displays.   But it was in the 'venatio direptionis' that ostriches were usually seen.  Something like a public safari, the arena would be filled with trees to create a jungle effect and the 'forest' was filled with a thousand ostriches red deer and wild boar.

Spectators were then allowed to hunt the animals in the arena and take home what they could - a kind of do-it-yourself ancient Roman take-away.

Sir Paul McCartney played the Colosseum before riding a bike round Rome.

Amongst those who have been fortunate enough to play in Rome with the arena as a backdrop are Bryan Adams, Billy Joel, Simon and Garfunkel and Elton John.

The Colosseum is rarely used to stage large events.  A charity show by Ray Charles was the first ever concert to be held in the arena in 2002 and in 2003 Sir Paul McCartney played an historic concert to just four hundred people.

As well as Beatles, Wings and solo material the playlist included a special rock version of "Volare" - sung partly in Italian.  The following evening Sir Paul played to a larger audience in a free concert outside the Colosseum walls.

Booked to return to the U.K. on a flight the following day, he changed his mind, cancelled the early flight, booked another for the same evening - and was seen spending the afternoon pedalling along the Lungo Tevere, admiring the beauty of Rome.

How to find out more about
the Roman Colosseum

The second set of strange facts about the Roman Colosseum includes myth-busting information about lions and Christians, whether 'thumbs-up' actually meant 'thumbs-down', and what Britney Spears was doing singing in the Colosseum.

If you're taking kids to see the Colosseum in Rome, these weird but fun facts about Italy are bound to whet their appetite.

The Colosseum in Rome - Top Tips

This link will take you to a page which gives practical information about the ancient Roman Colosseum : how to get there, opening times and cost.

It also recommends two of the most helpful guidebooks we have found (one for adults and one for children); and tells you how to keep your kids entertained by booking a trip to Rome's own gladiator school.

Read, and enjoy planning your trip to one of the best places to visit in Italy!

Modern Rome, and things to do