Italian Mardi Gras face masks : what they are and what they mean.

- before you decide on which Mardi Gras face masks to buy, find out here what each one means.

Italian ’Carnevale’ or Mardi Gras face masks have a tradition going back centuries - they are the most notable of the Carnival traditions in Italy.  If you’re going to any masked ball, they are an absolute must.

But do you know what the mask you’re going to buy signifies? Do you want to be portrayed as naughty, or nice? The one thing you don’t want to do is wear something which tells the world you’re a devil if what you want to be is a princess!

So here, for your information, is what each type means and a link to a page where you can see each one in more detail and buy if you want to.

Colombina is the most common, and one of the oldest traditional disguises. It is always a half mask covering the eyes and nose so is one of the easiest to wear for a party because it allows its wearer to eat, drink and talk freely.

The literal translation of the word ‘Colombina’ is ‘turtle dove’.  In the Italian Carnival tradition the Colombine character was a young, pretty servant girl, pure and vulnerable.

But don’t be fooled! She was also intelligent, manipulative, and good at arranging romantic meetings either for herself or for her mistress.

This is the role for you if you’ve always wanted to be a pretty, witty young thing!

This is one of the most elegant of women’s disguises ever to grace the Venice Carnival.

There are many variations of this type of mask, but they’re all characterised by having gems, elaborate decoration and often a feather head-dress.

This is definitely a ‘mother of the bride’ mask! It’s more likely to be a older female than a young woman wearing this; the owner should carry it with an understated opulence and a regal bearing.

This is one of the oldest and most traditional of Venetian masquerade masks and you’ll see a lot of different versions of it in shops both in Venice and around Italy.

The main characteristic of Dr Death is the long nose, supposedly there stuffed with herbs to protect the wearer from both the stench of illness and the germs of his patients.

This was originally used during the time of the Plague in Venice, not as a party accessory but as a functional face covering.

This is generally thought of as a male mask. Its wearer should be somewhat mysterious, able to mingle with party-goers but serious enough to deal with medical situations when they arise!

The Jester, also known as the Fool or ‘Buffone’ is one of the best known characters in drama the world over.

First mentioned in ancient Roman times, the character is most closely associated with the Middle Ages.

The Jester’s aim is to entertain and to point out the weaknesses of other characters - a kind of early satirist.

In some early plays the Jester’s mask was a donkey's head and the ‘Buffone’ mask reflects this. It’s a particularly distinctive one : it has ‘tines’ or points both above and below the head, each one finished with a tiny bell.  The tines are thought to represent the ears of an ass; the bells are to indicate fun and frolics.

The wearer of this mask should be outgoing and frivolous, able to entertain and to keep up high energy levels right through the night! 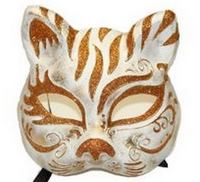 You may be surprised to know that the cat is one of the oldest and most symbolic of Venetian masquerade masks.

Although there’s no shortage of cats in Venice these days, previously legend has it that the city was over run with mice and there was not a cat to be seen.

A poor man from China visited with his cat, who rid the city of its mice.  The cat was thereafter revered as the city’s saviour and endowed with gifts including jewels and rich clothing.

So the wearer of a cat disguise should be quietly confident, elegant yet quick in movement.

There is a large variety of cat masks available. We feature the pretty, opulent Swarovski mask. 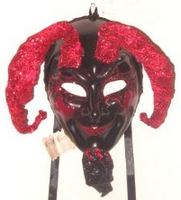 These are a very modern addition to Italian masquerade masks and are really associated with the growing tradition of celebrating Hallowe’en in Italy.

They are popular now not necessarily at Carnevale but certainly at student parties and other more general masquerade events.

We feature two versions which would be well suited to a male - a
Red Devil, and an original laser cut bat mask - and a feminine version which is a gorgeous silver butterfly.

If you’re in Venice at Carnival time, two of the best places to see the most flamboyant costumes are the Hotel Danieli and the Caffe Florian.  They're both expensive places -  sit and sip your coffee slowly!