Traditions of Mardi Gras in Italy : Orange throwing in Ivrea.

Italian holiday traditions are all about having fun.

Here’s how you can join in and celebrate these traditions of Mardi Gras if you’re anywhere near Piemonte.

As with all Catholic countries, the traditions of Mardi Gras in Italy are always interesting, varied - and sometimes just plain mad!

They’re given great importance because the weeks leading up to the period of fasting at Lent in the Christian calendar are about celebration and fun, before a tough seven weeks of denial and sombre days.

Carnevale in Venice is well known, but you may not have heard of one of the stranger traditions leading up to Mardi Gras or Shrove Tuesday (know in Italy as Martedi Grasso) which happens in the town of Ivrea, near Turin, in the Piemonte region of northern Italy.

It may be more well known as the headquarters of Olivetti, the famous typewriter company, but when it comes to Mardi Gras traditions Ivrea is a little more out of the ordinary. Because its contribution to Italian holiday traditions is - an orange battle.

Traditions of Mardi Gras : where did that come from?

Explanations for the origins of Ivrea’s orange fight are many and varied.

Some say it’s a re-enactment of a 12th Century battle between the Holy Roman Emperor Barbarossa and the commoners.

Others say the oranges represent the head of a local lord who took advantage of a peasant girl and was subsequently beheaded by villagers.

And still others talk of the town being laid siege by a lord who tried to starve the people but who was defeated by a local miller’s daughter leading the townspeople in revolt.

Whatever the starting-point, its theme is the power of ordinary people against the tyranny of the powerful - and this ‘Carnevale’ celebration is absolutely worth seeing in its modern form.

Traditions of Mardi Gras in Ivrea - what happens?

Anyone can take part, or if your idea of a good time is not to get pelted with oranges, you can choose to try just watching. 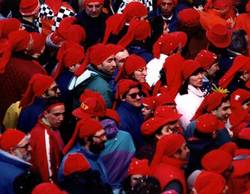 Whichever you choose, watch out for the red hats (known as ‘berretto frigio’) on sale all over town in the days leading up to the battle and make sure you wear one from the Thursday of Carnevale week to show your full willingness to participate in the fun and games.

Once battle commences, the red hats are a sign of an amnesty - a bit like blue United Nations helmets - and strictly speaking if you wear one you won’t be either throwing oranges or having them thrown at you.

Having said that, if you’re there or thereabouts don’t expect to remain completely juice free!

Orange pulp often gets as deep as 30 cm in the streets and with that many oranges being thrown, chances are you might and up as an unintentional target!

On the day of the battle itself there’s a procession of horse-drawn carriages led by Violetta - the miller’s daughter who started it all - throwing flowers and sweets to the crowd, and accompanied by pipers and drummers.

Once the formal procession has passed, let the battle begin! 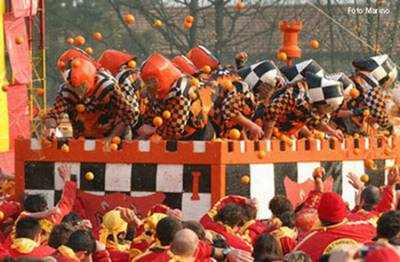 More carts trundle through the streets carrying ‘knights’ complete with helmets and armed to the teeth - with oranges. The crowds force the carts to slow and then stop - and so the battle begins.

It’s sticky, it’s mushy, it can be a bit on the hard side if you’re hit full on by a whole orange. Some people feel it’s a waste of good oranges.

But this is Italy. This is one of the best loved Italian holiday traditions of Mardi Gras.

If you’re anywhere near Piemonte (Piedmont) in the days before Shrove Tuesday, it’s definitely worth a visit.

For more information about the traditions of Mardi Gras in Ivrea, have a look at the official Ivrea Carnival website (available in English) where you’ll be able to see the dates and specific times each year and have a look at some of the pictures from previous years.

If you’d prefer a more sedate run-up to Lent, Venice Mardi Gras traditions are the most celebrated. Find out when Mardi Gras in Venice is - and buy yourself a mask before you go!