Rome's climate : how to survive the summer months.

The weather in Rome, Italy in summer is best described in one word : hot! 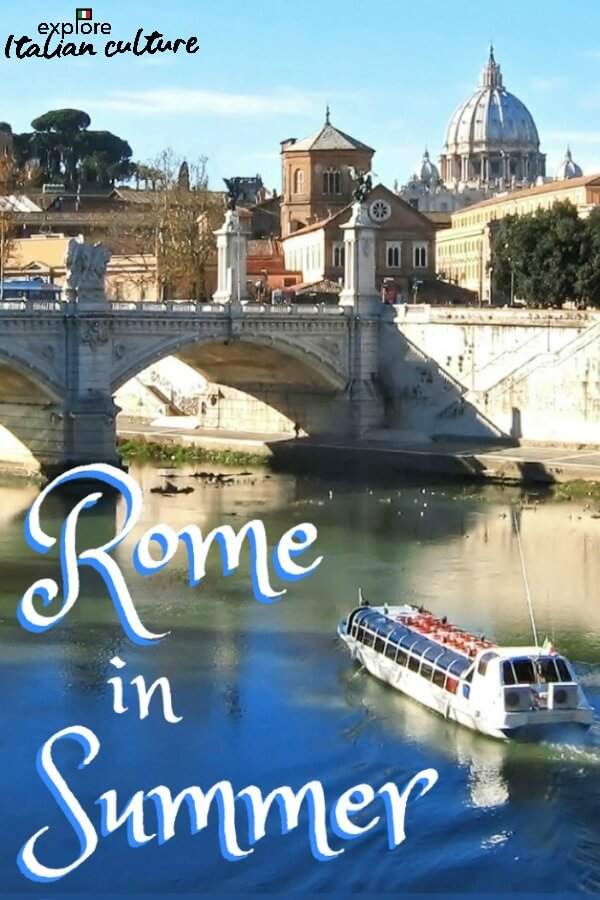 Honestly? Rome's climate in summer is relentlessly hot. Most people who live and work in the city get out as fast as they can when summer comes, and head for the coast.

Temperatures can reach as high as 45° C, 113°F, and there is often little or no breeze. It's hot, it's sweaty and it's very, very tiring.

As the gorgeous warmth of spring turns into the heat of July, Rome takes on a different character.

Lots of businesses close while their Italian owners head away from the city, and famous sites become packed with queues of tourists often tired and sometimes bad-tempered in the sweltering sun.

And kids? Kids become irritable and fractious. The last thing they want to do is to be hoiked off to yet another pile of ancient stones...

If you're planning to visit Italy, and Rome in particular, any time between the end of June and mid-September you'll need to make provision.

So here you'll find all you need to know about surviving in the summer months, suggestions for things to do and tips for how to keep cool in the summer heat.

When is Summer in Rome?

June is generally very warm but July and August are definitely the height of the summer months, with the heat often carrying through into mid-September. Even October can stay quite warm as Rome's autumn climate is fairly temperate.

We were married in Rome in September, and the colour of the sky made it look as though we were on a film set with a backdrop! The temperature soared at 38°C (100°F). 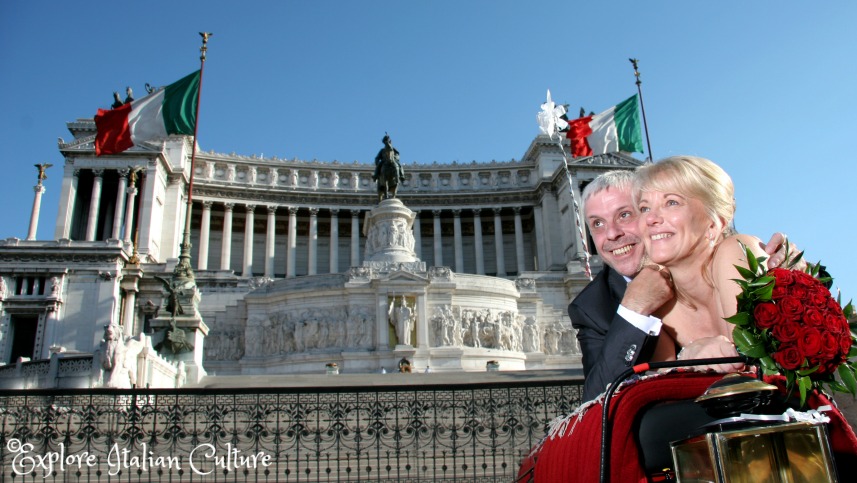 Our wedding, September in Rome: in front of the Vittorio Emanuele monument.

What's the average temperature in Rome in the summer?

Officially, you'll find information telling you that the average climate in Rome for July and August is about 32°C, 91°F, dropping at night to around 17°C, 64°F. In fact, temperatures very often reach a minimum of 40°C (104°F) and we have known it to stay at 45°C for several weeks.

After August these figures can fall a little but it will remain around the 27°C, 80°F, mark for a large part of September.

It's so hot that the horses have to wear ear protectors to prevent sunburn! 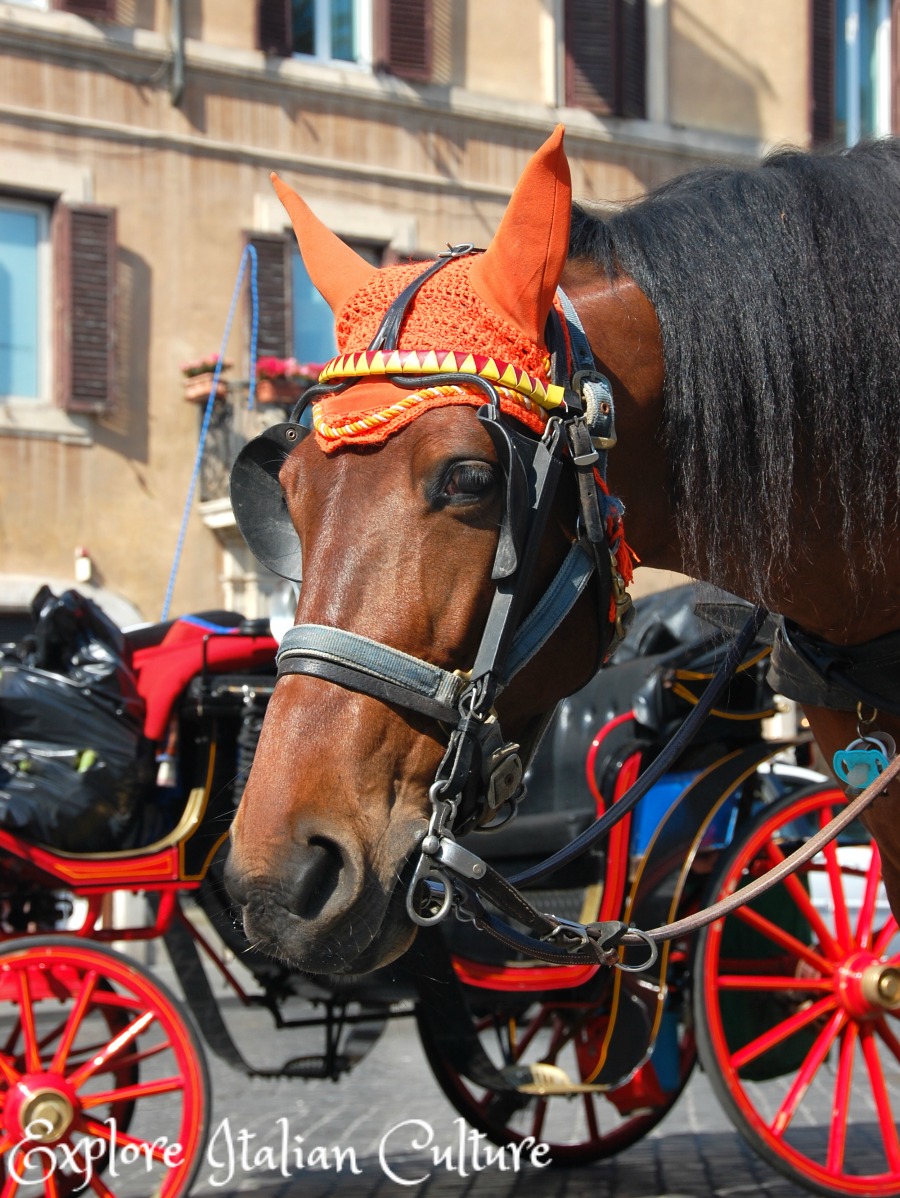 There's generally very little rain during these months, although there is the chance of an odd squall which lasts a very short time and cools the air.

It may be hard to foresee this when you're shivering in the winter months, but Rome's summer climate is so hot that you'll find yourself welcoming the rain if it comes!

And if it does, make the most of it and look for the great photo opportunities it gives. There's always a positive side to Rome, whatever the weather! 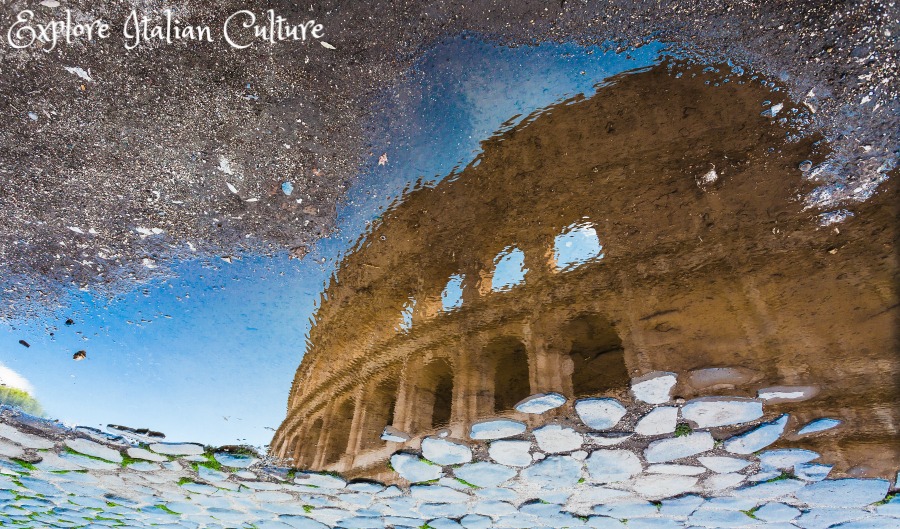 You can always find great photo opportunities in Rome, whatever the weather!

So what's good about Rome's climate in Summer?

The skies are cobalt blue, making for stunning pictures of the soft golden tones of ancient stones set against the incredible blue backdrop.

This pic was taken in August, at the height of Rome's summer heatwave. 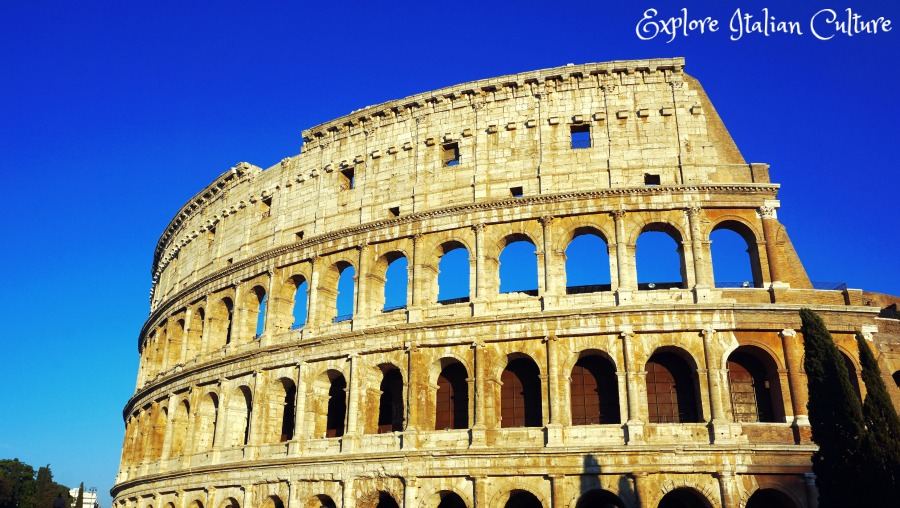 Clear blue skies give great opportunities for photos, both during the day and during some fabulous sunsets. Just be careful the bright light doesn't wash out the beautiful colours.

If you're careful to look upwards, you'll also see riots of colourful flowers cascading from balconies... 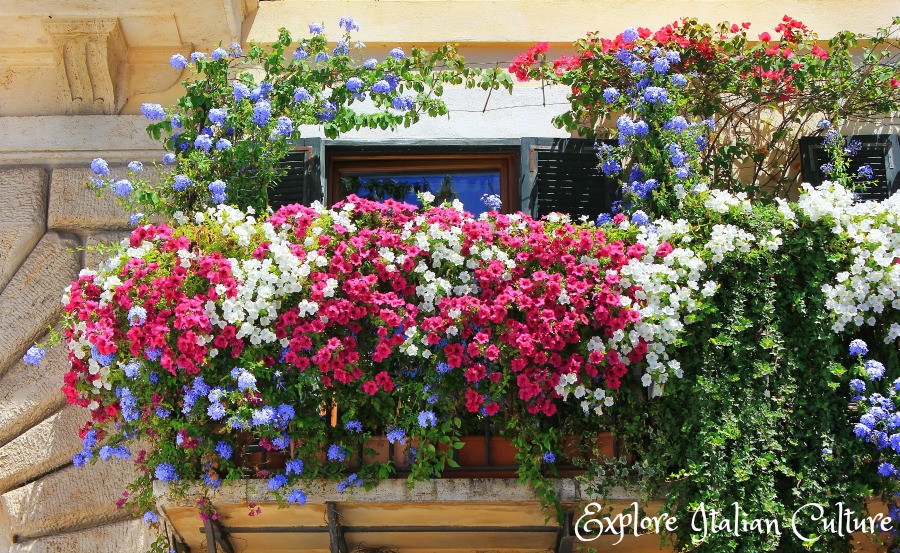 This particular balcony is an apartment in the middle of the Piazza Navona, right opposite the Bernini "Quattro Fiumi" ("Four Rivers") fountain. It's always beautifully decorated with flowers in the summer. Be sure to look for it when you're in Rome! 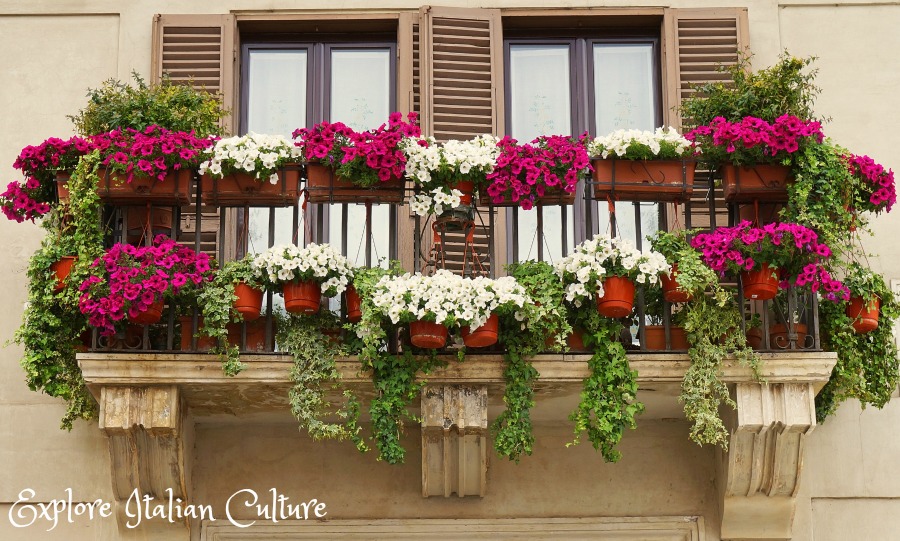 You'll find any of Rome's open air markets bursting with buckets of flowers, too - this one's in the aptly named Campo de'Fiori - the "Field of Flowers". 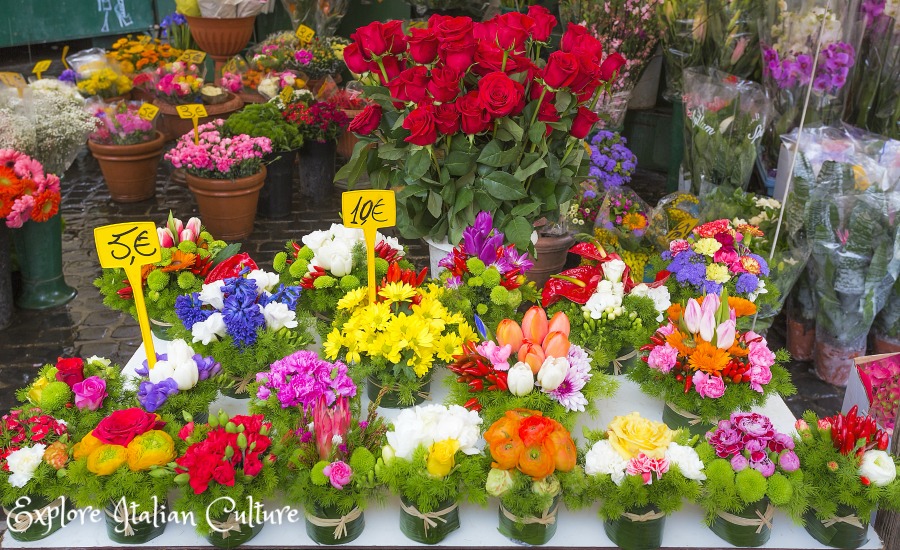 What about the nights? They're lovely and warm, so eating outside while watching the world go by is a real pleasure. 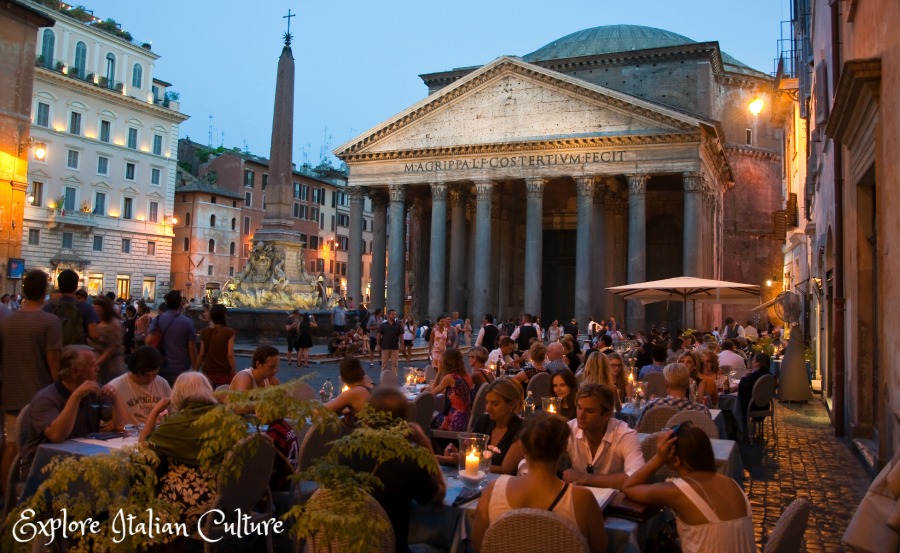 Eating outside, in the shadow of the Pantheon, on a balmy August night.

It's very, very hot! There's not usually much of a breeze around Rome either, so the air can become extremely humid.

You'll find yourself sweating copiously and your energy will be sapped in the hottest part of the day between 11am and 3p.m. The only sensible thing to do at that time is what the Romans do - take a 'siesta'!

It's all in the planning!

Around the time of the 'Ferragosto' holidays from 15 August, quite a lot of businesses close down as their owners, unable to tolerate Rome's climate in summer, head for the coast. Be prepared for some bars and restaurants to be closed until early September.

Think about doing the same yourself.

The tiny island of Ponza is a train and ferry ride away and makes for an unusual day out, away from the crowds of the city to a tranquil fishing island.

It's where a lot of people from Rome go to spend the summer - and is it any wonder? 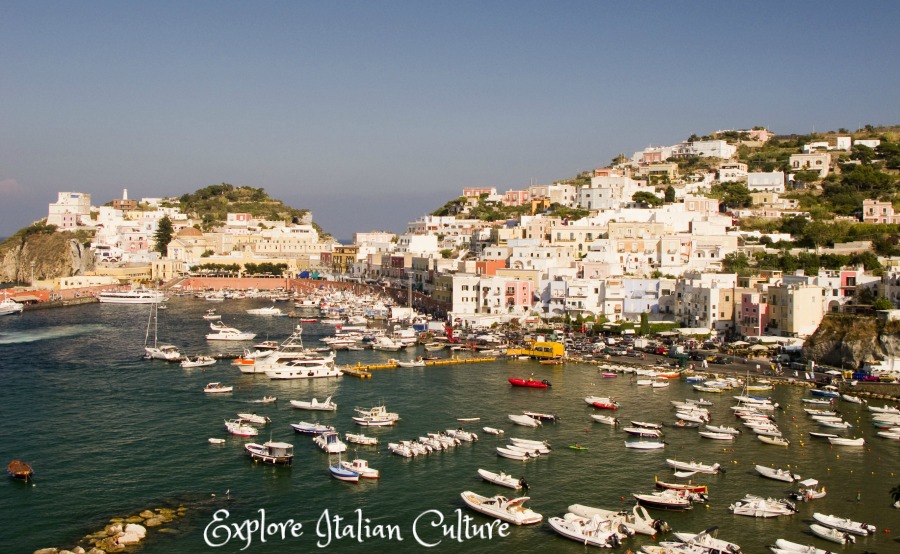 We'll have an article soon about this stunning island - bookmark this page or join our newsletter to keep up with information when it's published.

What to wear in Rome in the summer?

No real need to worry about what clothes to take!

The predictability of the heat of Rome's climate in summer means that light clothing for both men and women is the order of the day. Take an umbrella too, for those infrequent summer showers.

Bear in mind, though, that this is a very stylish, working city. It's not just a tourist attraction. It's also the seat of government and trade.

So you'll find those who work and live in Rome, despite the heat, always look stylish, too. If you want to be marked out as a tourist you're fine to wear shorts, tee-shirts and sandals.

If you want to fit in more with the locals, go for a more stylish look. Tailored shorts, open-necked shirts and light jackets for men; ladies - just channel your inner Audrey!

Bear in mind that you will need to cover up if you want to go inside churches in Rome, including St Peter's Basilica. You will be turned away if you have bare shoulders or midriff, a low top or too-short-shorts.

Italian women love scarves (and men too, but only in colder weather) so take a large scarf or wrap with you. It doubles as a fashion statement and a cover-up.

If you don't have one, you'll find plenty to buy from street sellers all over the city.

Any special things to do in Rome in the Summer?

There are always lots of outdoor events happening in the summer in Rome, from ballet to opera to modern music festivals and the odd spontaneous party! These change each year, so keep your eyes open for posters locally or ask at your hotel.

One of the most spectacular events to take full advantage of Rome's climate in the summer are the open air concerts at the Caracalla Baths. Whether you see opera or a performer (we saw Bob Dylan there!) it's an unforgettable spectacle. 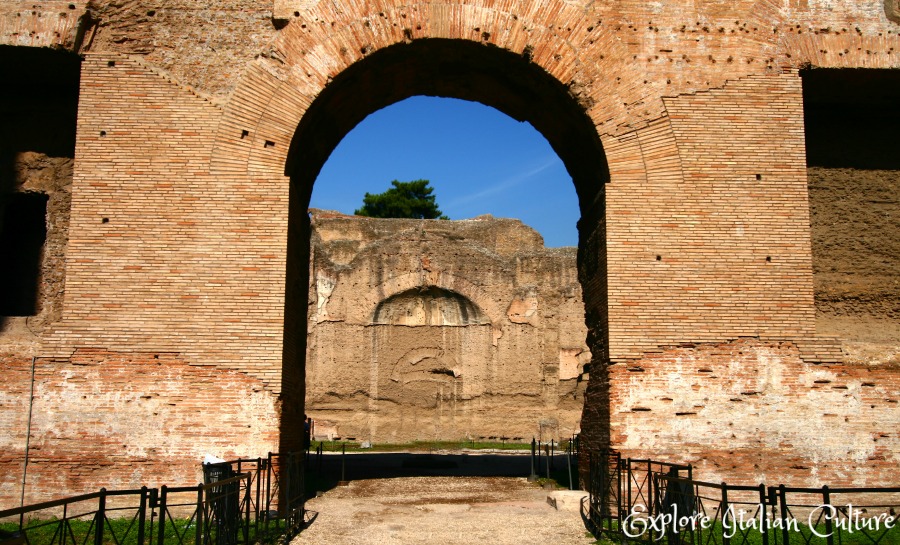 The Caracalla baths - amazing in themselves, stunning as a concert backdrop.

If you're looking for tickets for Caracalla events online, buy direct in advance, at this link (in English). These tickets always sell out, so book as far in advance as you can.

One of our other favourites is to keep an eye on the "Rockin' Roma" website, which has details of all the rock concerts which go on every summer in Rome. We've seen some great bands there, both Italian and international - including the most recent performance by the Rolling Stones!

How to plan ahead for the weather.

If you're staying in Rome itself, you need to plan ahead. Bookmark this page and make sure to watch the daily weather forecast - if you see it climbing, look at our tips about keeping cool in Rome's climate in the summer and make note of what you will need to do.

You should take the possibility of heat- and sun- stroke in the summer in Italy very seriously even on what may look like an overcast day. Make sure you drink lots of water, wear a hat if necessary, and stay in the shade where possible.

And if you have animals with you, make sure you learn about ways to prevent sunstroke in pets too.

Of course, the heat anywhere in Italy during the summer is a great excuse to eat lots of lovely Italian "gelato"! 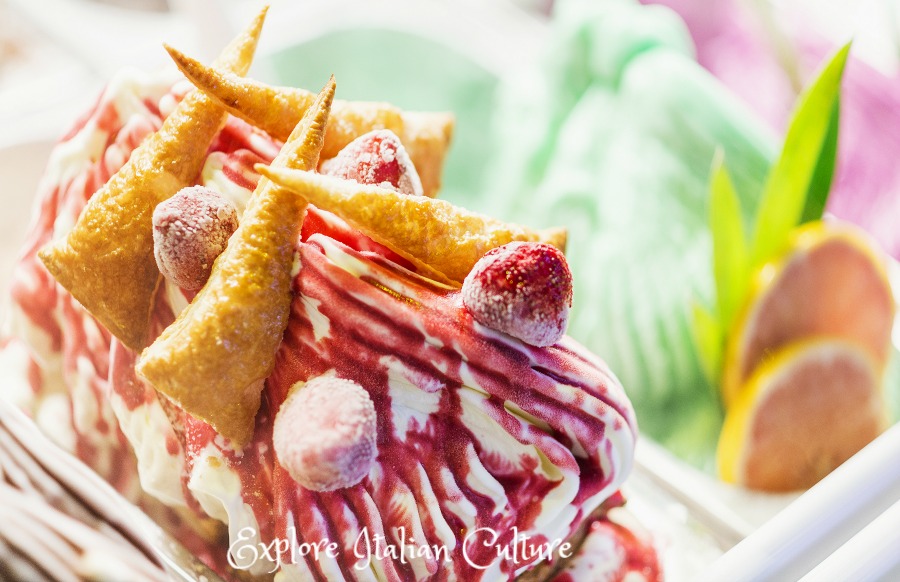 Want to know about Rome at other times of year? No problem!

Click on any of these pics for a wealth of information about Rome through the seasons. 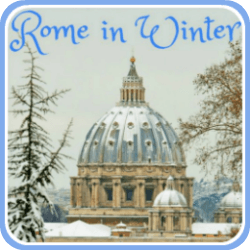 Take a look at my Pinterest board for more pics of Rome's weather through the seasons!